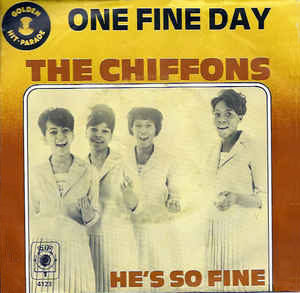 March 30 – On this date in 1963, The Chiffons, a previously unheard of group, took over the #1 spot on the Billboard Hot 100 chart with “He’s So Fine.”  The song had been composed by a young man who loved music and viewed his passion as a way to get his family out of poverty and though he accomplished that goal with “He’s So Fine” the story has somewhat of a tragic ending.

The song’s author, Ronnie Mack was born in the Harlem section of New York City during the summer of 1940.  He taught himself to play piano as a child and performed in a doo-wop band called the Marquis as a teenager.  The Marquis were a unique group for the time because they featured a female lead singer.  One day he heard about a singing trio of teenage girls (Judy Craig, Patricia Bennett, and Barbara Lee) from James Monroe High School, who later auditioned for him.  While blown away by their performance, he thought they could use one more strong voice so he recruited Sylvia Peterson who had sung in Little Jimmy Rivers and the Tops.  Mack became the quartet’s manager and started writing songs for them, including one called “He’s So Fine.”

Once released, the song shot up the charts in the winter of 1963, beginning a four week stay at #1 on this date.  While Mack was able to literally shower his family with cash that took them out of poverty, the euphoria was short-lived.  Mack died at the tender age of 23 from Hodgkins Lymphoma.  (Reprinted and edited with permission from Michael Walter author of “On This Date In Music”).  To learn how the recording session influenced one of the most famous sounds of the early sixties, Ronnie Mack’s journey to score a record label, and about other dates in music history, get Michael’s book at OnThisDateInMusic.com. #OnThisDateInMusic #MichaelWalter