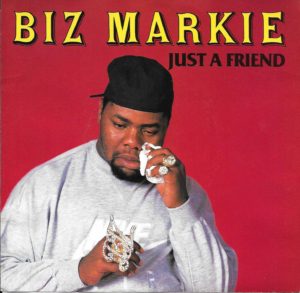 Markie was sitting at #9 on the pop chart.  It was the highest the song would get and the only time the rapper would crack the Top 40.  But if you’re going to be a One Hit Wonder, let it be as memorable as “Just A Friend,” a song that, to this day, brings a smile to the face of just about anyone listening.

It’s helped maintain a fairly successful career for the rapper.  He’s appeared in music videos, television shows, and even in the movie Men in Black II where he plays an alien version of himself.  Chris Rock had Biz Markie open for him on a comedy tour in 2008 and his one hit makes sporadic appearances in television shows and movies.  (Reprinted and edited with permission from Michael Walter author of “On This Date In Music”).

To learn about Biz Markie, his real name, his humorous rap, how he used Freddie Scott’s 1968 “(You) Got What I Need” without its writers asking for credit, how his “borrowing” another song set the precedent for all future rap songs to give credit for sampling and interpolating other songs, and more, get Michael’s book at OnThisDateInMusic.com. #OnThisDateInMusic #MichaelWalter