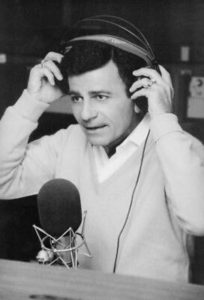 April 27 – On this date in 1932, Kemal Amin Kasem (“Casey Kasem”) was born in Detroit, Michigan.  He would go on to be one of the most recognizable voices in pop radio and his weekly countdown shows were must-listen-to programs for anyone who wanted to know what was riding the charts on any given week.

Kasem listened to radio programs as a child and dreamed of becoming a DJ.  He got his first broadcasting experience in high school when he’d call the local sports on the radio.  When he was drafted into the army and sent to Korea, he became a DJ on the Armed Forces Radio Korea Network and started sprinkling in facts about the songs he was playing.  The trivia was well-received.  It’s something he continued to do after his stint in the army as he took various DJ jobs in Detroit, Cleveland, Oakland, and then Los Angeles.

It was in the City of Angels, on KRLA, that Kasem started becoming a national name.  In 1964, Dick Clark hired him to host a teen-oriented music television show called Shebang and the exposure he gained from that led to other jobs on television shows and small movie roles.  In 1969, Scooby-Doo, Where Are You! hit the air with Kasem voicing the role of Shaggy.

Then in 1970, Kasem launched the American Top 40 program.  It began as a three-hour show that was carried by seven stations but it became an instant hit and was soon syndicated all around the country.  By 1978, the show had expanded to four hours, mainly because of the increasing length of pop songs.  The format was simple.  Kasem took that week’s Billboard Hot 100 chart, started at #40 and counted his way down to the #1 song of the week.  Using the style he’d already perfected, Kasem provided interesting facts or trivia about some of the songs or artists and these tidbits added to the overall quality of the show.  He also started doing a “long distance dedication” and of course, his signature sign-off: “Keep your feet on the ground, and keep reaching for the stars.”  (Reprinted and edited with permission from Michael Walter author of “On This Date In Music”).  To learn more about Kasem’s achievements and other dates in music history, get Michael’s book at OnThisDateInMusic.com. #OnThisDateInMusic #MichaelWalter