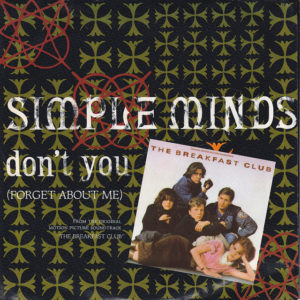 May 18 – On this date in 1985, Simple Minds “Don’t You (Forget About Me)” climbed to #1 on the pop chart, knocking Madonna’s “Crazy for You” from that spot.  In just a week, it would surrender the top spot to the Wham! Song “Everything She Wants.”  “Don’t you (Forget About Me)” was a song written specifically for a movie and was turned down by numerous artists before Simple Minds agreed to record it.  The song and movie would become huge hits and even today you can’t think of one without thinking of the other — and together they bring anyone old enough to remember it, back to the mid-eighties.

Towards the end of filming Sixteen Candles, writer and director John Hughes asked Molly Ringwald and Anthony Michael Hall if they’d star in his next film as well.  When they agreed, he set out to write a script about a diverse group of high school students stuck in a library on a Saturday on detention.  Keith Forsey, who was just coming off the success of composing “Flashdance… What a Feeling” for the movie Flashdance, was asked to write some songs for the movie.  He spent time on the set and was moved by dialogue towards the end of the film when Hall’s character asks the others if, when they return to school, they will all still be friends.  Inspired by that scene, he began to write lines like, “Will you recognize me? Call my name or walk on by?” and of course the urgent plea in the chorus not to be forgotten.  With co-writer Steve Schiff, Forsey completed “Don’t You (Forget About Me),” recorded a demo and presented it to Hughes, who loved the song and decided to use it in the movie’s opening.

Forsey then set out to get the song recorded, but he was met with rejection after rejection.  Chrissie Hynde, who actually loved the song, had to pass on it because she was pregnant and didn’t want to make a video.  But she loved it so much she told her husband Jim Kerr, frontman for Simple Minds, about it.  Kerr didn’t think much of it and Simple Minds generally didn’t like recording songs the band didn’t write, so initially they passed as well.  It wasn’t until Forsey flew to Scotland and sold Kerr and the band on the prospect that the song could help break them in the States that they agreed to record it.  Simple Minds went into the studio and within hours completed “Don’t You (Forget About Me),” rearranging the song slightly, adding the “hey-hey-hey-hey” opening and the “la-la-las” as the end.

The Breakfast Club was released in early 1985 and it has since gone on to be one of the most memorable (and quotable) movies of the eighties.  “Don’t You (Forget About Me)” was released when the movie came out and benefitted from massive MTV play as well as fitting into both rock and pop radio formats.  The song hit #1 on this date in 1985.  It would be the only chart-topper for Simple Minds.  It’s a song that nobody seemed to want to record but to this day, when anyone old enough to remember the mid-eighties hears those opening, thundering drums and those militant, “hey, hey, hey, hey’s” they are instantly transported back to those five students serving Saturday detention at Shermer High School.  View the music video here

(Reprinted and edited with permission from Michael Walter author of “On This Date In Music”).  For further insight on other dates in music history, get Michael’s book at OnThisDateInMusic.com. #OnThisDateInMusic #MichaelWalter

Posted in On This Date In Music, Uncategorized and tagged MichaelWalter, OnThisDateInMusic