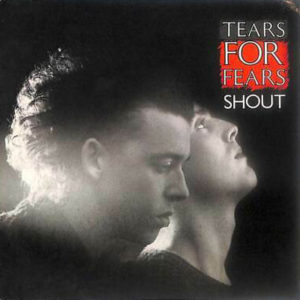 August 3 – On this date in 1985, Tears For Fears scored their first #1 hit with “Shout.”  The song would stay at the top of the charts for three weeks, assisted greatly by a video that was in heavy rotation on MTV.

Roland Orzabel and Curt Smith met as teenagers in the late seventies in England working together as session musicians.  They joined a band called Graduate that released one album in 1980 before they left to form Tears For Fears.  Orzabel and Smith were both followers of American psychologist Arthur Janov and his trauma-based psychotherapy called primal therapy.  Janov theorized that we repress negative memories from childhood that can be expressed (and often exorcised) in therapy by screaming or shouting.  Orzabel and Smith were such believers in the therapy and Janov’s writings that they named their band after a section in Janov’s book Prisoners of Pain in which he referred to “tears as replacement for fears.”

Tears For Fears’ first album, The Hurting, continued their focus on psychology, with over half of the songs dealing with emotional distress or primal therapy.  It had a definite synth pop sound to it.  While it was huge in England, it did not make much of an impact in the States.  Their follow-up LP moved to a slightly more mainstream rock and pop sound.  They named this offering Songs from the Big Chair, inspired by the movie Sybil in which a young girl with multiple personalities claims she only fees safe in the “big chair” in her therapist’s office.

The song that would launch the band to worldwide fame was the album’s second single, “Shout.”  A huge reason for the song’s success was a video that went into heavy rotations on MTV as Tears For Fears became another English band to benefit from what became known as the second British Invasion.

Orzabal began the song by singing the chorus very repetitively, like a mantra.  He then blended the verses into the chorus so they flow together more than most songs.  With a chorus that urges the listener to “shout” and “let it all out” one might assume that Orzabel and Smith returned to singing about primal therapy, but Orzabel disputes this assumption, saying, “It came out in 1984 when a lot of people were still worried about the aftermath of the Cold War and it was basically an encouragement to protest.”  Smith adds, “It concerns protest inasmuch as it encourages people not to do things without actually questioning them.”

Whether “Shout” is another nod to Janov or an encouragement to protest, there is no denying the song has a cathartic feel to it.  “Shout” may not make the listener recall childhood trauma or pain, but it can feel good to sing along to, or better yet, to shout along to.  It can be a great way to “let it all out!”

(Reprinted and edited with permission from Michael Walter author of “On This Date In Music”).  For further insight on Janov’s primal therapy’s influence on John Lennon and Yoko Ono, MTV’s role in the second British Invasion, and other dates in music history, get Michael’s book at OnThisDateInMusic.com. #OnThisDateInMusic #MichaelWalter